Tata has revealed an electric sedan concept at the Geneva Motor Show 2018. Christened the E-Vision concept, the electric car is based on a slightly modified version of the modular OMEGA (Optimal Modular Efficient Global Advanced) ARC platform that also underpins the H5X SUV. Tata has derived this platform from sister company Land Rover’s D8 architecture. This modular, scalable and flexible platform will underpin more models in the future after the H5X and the E-Vision. Like the latter, the upcoming cars are expected to offer electric avatars as well. 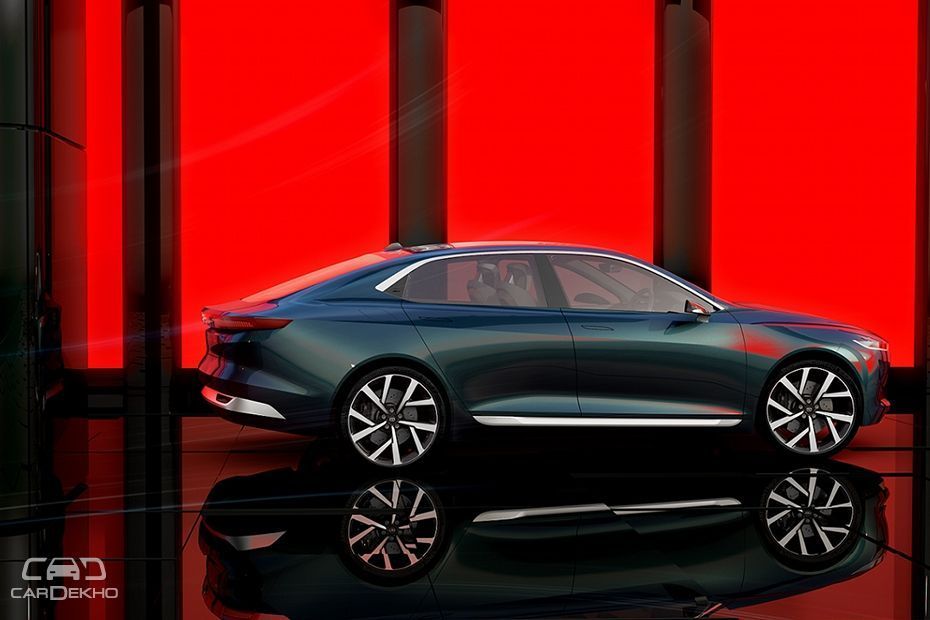 The electric sedan concept has now become the third model to adorn Tata’s new Impact 2.0 design language after the H5X SUV and the 45X hatchback concepts that were showcased at the Auto Expo 2018. And as you’d have imaged after seeing the H5X and the 45X, the E-Vision looks nothing like what you have seen from Tata Motors till date. Since the Omega architecture is not an all-electric platform, the concept sedan could also form the basis of Tata’s first-ever future D-segment sedan that could go up against the likes of the Skoda Octavia, Toyota Corolla Altis and the Hyundai Elantra. 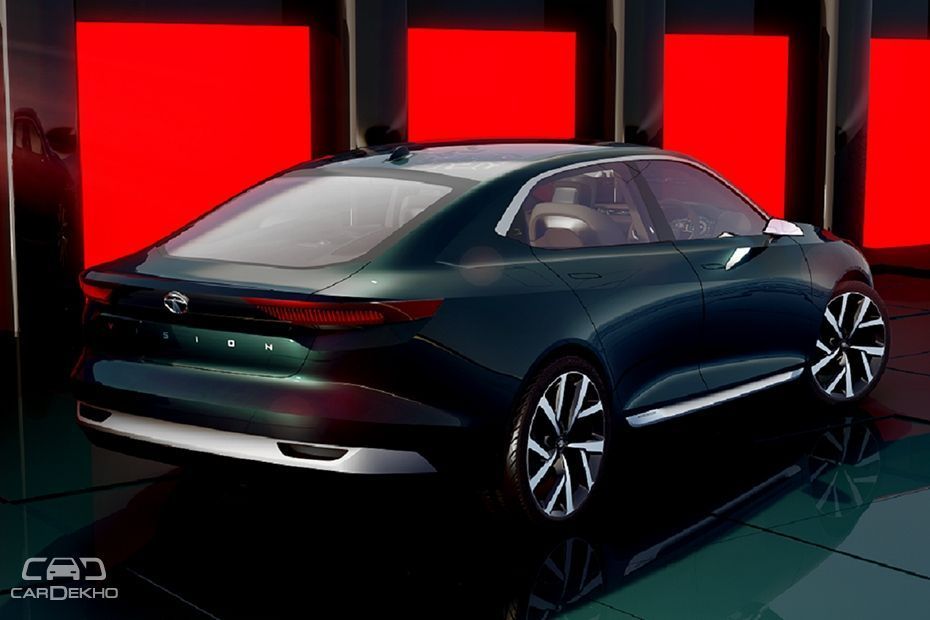 Unlike the flashy 45X and H5X, the E-Vision looks elegant and mature. It has that hunkered down look with the nose diving in at the front, much like Tata’s 45X concept, which in turn pushes its face further down with a relatively elongated bonnet – a design element that can be seen it on the new Volkswagen Polo and Virtus sedan as well. The grille swoops inside and is flanked by sleek headlamps. The concept sedan has a coupe-like roofline that features a thick C-pillar. At the rear, it gets sleek wraparound LED tail lamps along with the ‘Vision’ badge that spans across the width of the car. 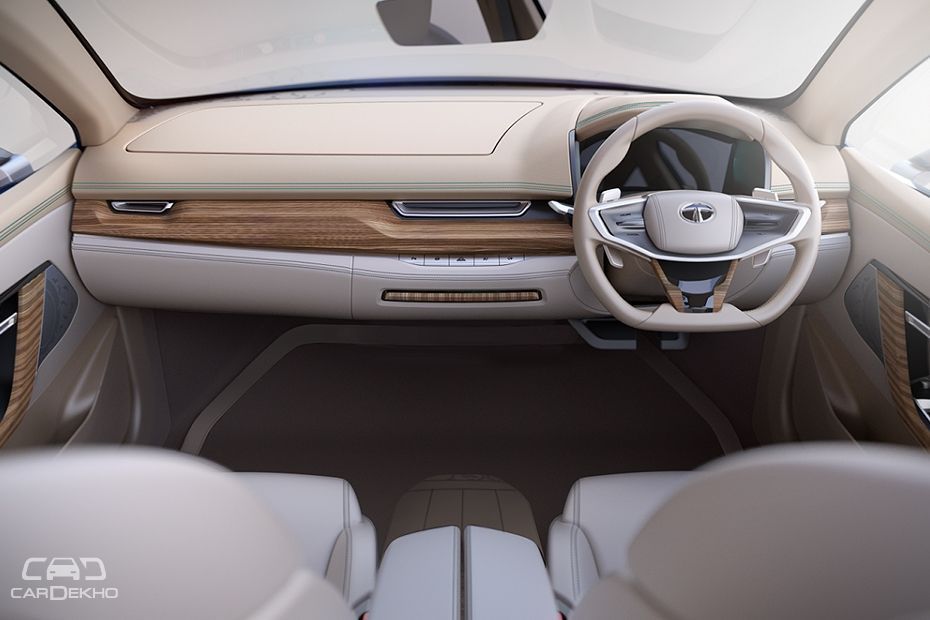 The E-Vision’s elegant exterior design complements its interior, which has an air of minimalism about it. The dashboard is multi-layered like the H5X and features a light beige coloured theme with wood highlighters. Besides the regular instrument cluster, there’s also an additional one on top of the dashboard, which pops out as and when needed. Further, the infotainment system also protrudes out of the dashboard and there’s no running central console that starts from the dashboard and separates the front two seats, like we see in most modern-day cars. The absence of this console leaves acres of room for passengers at the front. Tata has not revealed details of the E-Vision’s electric powertrain save for mentioning that it will have a sub-7 second 0-100kmph sprint time and a max speed of 200kmph. We can expect a range of about 300km to 400km from a battery of an unknown capacity that powers the dual electric motors mounted at either axles. This puts it in the same league as some of the popular electric cars like the Hyundai Ioniq, Chevrolet Bolt and the Tesla Model 3 that can cover as much 300 kilometres on a full charge. We believe that the production-spec version could also feature a hybrid powertrain, if not regular petrol and diesel engines. 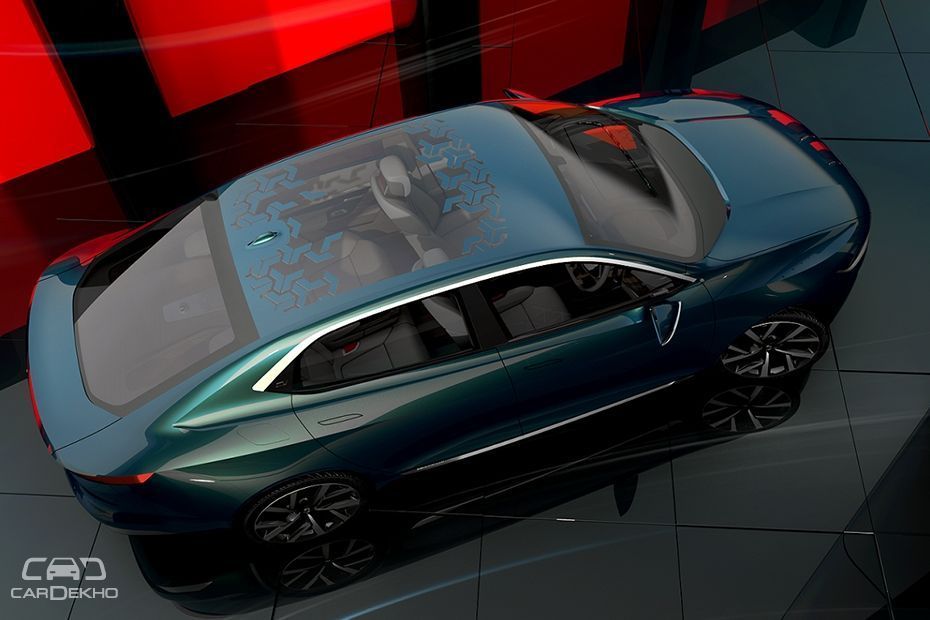 While India is still not ‘the’ market to go all electric, Tata is expected to soon enter this space with the Tigor EV, which was displayed at the Auto Expo 2018. We expect more electric and hybrid cars to join Tata’s fleet since India is expected to implement CAFE (corporate average fuel efficiency) norms from 2022, which will require all carmakers to have a minimum average fuel efficiency for their entire portfolio; and hybrid and electric cars will make it easier for carmakers to achieve the fuel efficiency targets. While it might sound a little over-ambitious at the moment, we won’t be surprised if Tata launches a production version of the E-Vision sedan in a few years time. Mahindra, Hyundai and some more manufacturers are gearing up to launch long-range and relatively capable electric cars in India soon.